AAAERGHHHH I AM SO EXCITED AND HAPPY TODAY AND DO YOU KNOW WHY???? IT'S THIS BAD BOY: 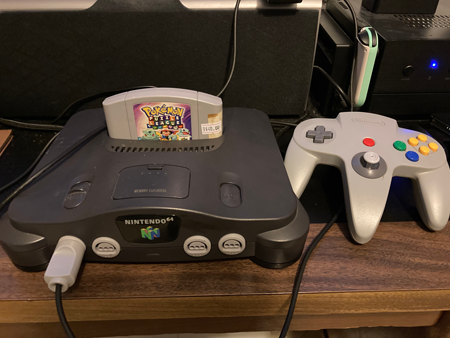 BRAND NEW (old) NINTENDO 64!!! i've been wanting to get one of these for sooo, soooo long, but everything online looked like it was either too expensive, too worn out, or too good to be true. i mostly kept it at the back of my mind, but today, i headed to the local flea market with my mom. i had been wanting to go, since it's a fun place to browse, and i'm moving out of state this week. mostly, i wanted to browse the cool bookstore and big retro video game store. i didn't really expect to buy anything, necessarily, but i did hope that maybe the game store had an old nintendo sitting around. i asked about it and he did not LOL. the guy running it noted that every time he got one it was gone within the hour. so we went on our way.

turns out there is another retro video game store. it was super tiny and cute; i genuinely think it was smaller than the bedroom in my college dorm, which is probably why i didn't realize there was another one. going inside, i immediately spotted a nintendo 64 box up on the wall... buuuut it was 300 dollars. way more than i could afford. i was just about to cut my losses when the clerk pointed out- right in front of my face, somehow i missed it, an unboxed nintendo 64. that one, with its controller, all the cables, a brand new memory card, and a free game, was less than 100 dollars for the entire bundle. i had to think about it for a while, but obviously you've seen the photo i posted I TOOK THAT THING HOME!!! i mentioned it came with a free game, but the games designated as free were all third-party football titles?? so i haggled a bit with the cashier to get pokemon puzzle league at a lower price than it was marked. (he was very nice! i promise i was nice too!!!) i think it was worth it!!! i took it home, worked a long shift, came home, and played with it.

story time is OVER and NOW you are going to watch as i wax poetic about old gaming devices. read my blogs boy. playing on the nintendo 64 is such a fun experience... if it were just about the games, i would have just emulated them; it would have been easy. but it's more than just the games! it's the experience! the clunky yet charming interface of the 64 and other consoles from the 90s and 2000s just makes me so happy. it's very fun and playful, and i wish more tech had that fun style instead of focusing on being as sleek and skinny as possible?? anyways there's something really special about playing a game with an old controller. there's definitely elements of nostalgia and novelty to it, but it genuinely really is fun! the graphics, while outdated by today's standards, are just so fun and charming. having it plugged into a modern tv scales it up a little more than it was meant to, but it really hardly makes a different. it's just so much fun. also... there's something so melancholy about finding someone's old save data on a used game. at least eight people had this game before me; i felt a little guilty having to erase one for my own slot. sorry to joanna, if ur out there!

well, needless to say i'm very excited. my wallet hurts so bad right now i don't even want to THINK about buying anything else for a while... but. i would like to get another controller for some multiplayer fun (maybe one of the cool clear ones with visible innards and wiring!!) and a couple more games. pokemon stadium and pokemon snap are high up on my list! anyways 11/10 i love old consoles. they may be outdated but they can never truly be replaced. it's my hope to someday have my own apartment with my own "game corner" for times long since past... ^_^