Eevee and Eeveelutions
eevee and its evolutions are my VERY favorite pokemon!! it's just so cute, mostly, and it has so much potential in its evolutions. i always try to have one on my team in the games, and i always make sure to have one in my house! or five. mostly what i collect for eevee is plush; i love stuffed animals and eevee has SO MANY. there's some other stuff in here too, though! my eventual goal is to collect every eevee ichiban kuji plush.

some of my favorite kinds of eevee plush to collect are, of course, the ichiban kuji releases; they are often SO big and cuddly and always have so much character to them. i also love the FITs/sitting cuties, they're cute and really fun to photograph. and finally... just about any large eevee plush has my heart! i really enjoy plushies that feel like they're really real eevees.

my eevee collection is separated into eevee plush, eeveelutions, and other. these collections may be split into separate pages in the future, depending on how big each collection gets. otherwise, they are ordered by age, with the newest ones on top.

temporary note: about 95% of my belongings are in storage for the summer. many items are unavailable to be photographed right now. sorry for the ugly placeholders lol

ramona came as one three plushies in a lot i bought off of mercari. i almost got scammed before buying her! i was looking for this specific plush for a while, and couldn't find her anywhere, until someone posted an ebay listing for only fifteen dollars and free shipping. i almost bought it, but someone in my server correctly pointed out that the listing was incredibly suspicious! then, they directed me to a lot of three that they had found! it was not the first time that they really helped me out. ^_^ this plush is so incredibly cute, and perfect for me as a pianist myself.

ramona is an aspiring musician. she's a bit particular and finicky, but kind beneath it all! she's a great big sister to the other vees.

sandwich came as one three plushies in a lot i bought off of mercari. he comes with a little bag that his head sticks out of and wears a bandana. he's sooo sweet, though his balance is not very good when it comes to sitting LOL.

sandwich is one of the youngest eevees in the family. he's bright-eyed and full of optimism, and he loves loves loves to cook and eat treats! but beware... he has a mischevious streak and might steal snacks from you! but can you really stay mad at him?

pigment came as one three plushies in a lot i bought off of mercari. this plushie was originally not on my list, because i worried about the texture not being nice to touch. it's actually very nice and smooth, and he is overall incredibly soft and cuddly! he's a plush with so much character.

pigment (pig for short) is an ARTIST! he's creative and a bit wacky, and a little bit angsty too... sometimes it feels like no one understands him... but the other eevees truly do appreciate his talent, even if they may not understand him sometimes.

i like to carry plushies around, but worry about them getting dirty, so i was really excited when they released these washable plushies in japan. i was thinking about importing one, but i waited for a bit, and miraculously they got an american release!! so now i have one without breaking the bank. i take him everywhere.

pocket is SILLY and CRAZY!!!! he loves to be squeezed and spun around and tossed around. however you MUST not smack him too hard or throw him on the floor. he loves silliness and foolishness but you simply must be kind!!! 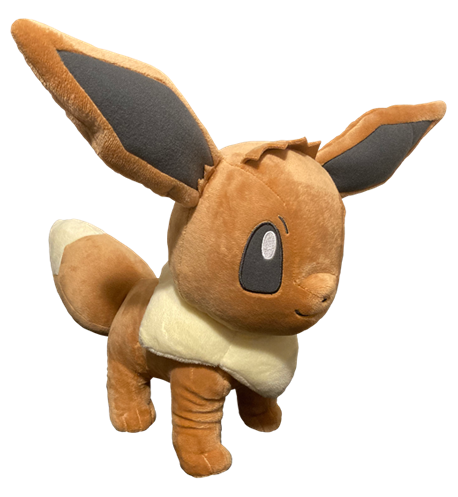 i saw this plush being sold secondhand on a server i'm in, but i was too slow to decide and missed it! i promised that if i saw it for a good price again i would get it... and only about two weeks later, a member of the server put this one up for sale! he's so cute and high quality, and his little legs are really funny.

milo is a pretty chilled out guy who takes life as it goes. he loves to relax and nap, but he also loves to explore and go on walks, too. he's often daydreaming... 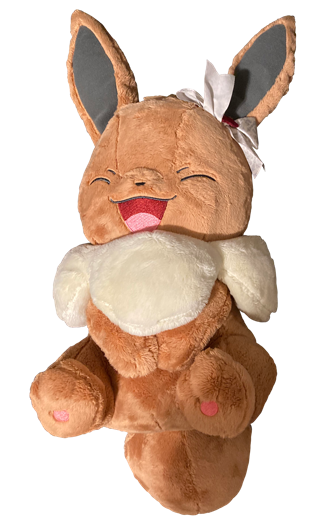 the first ichiban kuji eevee i ever got my hands on!! i was very excited to find such a cute plush in good condition and was surprised at how soft she was in real life. especially her tail!! her ribbon flips up a little; i would like to fix that at some point. but she's still so cute!! she's meant to lay face-up on her back, but you can actually sit her on ledges pretty securely.

angel is a silly little baby! she loves to play and have fun, and she's always giggling. she's so positive, and you'll never see her with a frown on her face; her happiness is clear to see by all who look at her!!! just hugging her can turn one's bad day right around. 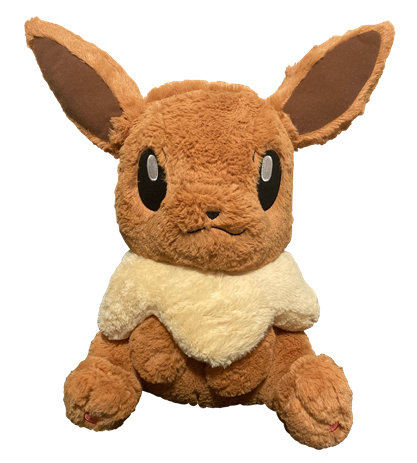 a big purchase! the fuwa fuwa eevee is so big and fluffy, it's kind of a must have. because i had to import, he was very expensive @_@... but i think it was worth it. he's so soft and surprisingly lightweight, and he nestles right into your arms. he's the BEST for cuddles!!

spencer is a very quiet and studious eevee. he loves to read and he can tell you soooo many cool things he's learned from studying. he's very awkward but he's truly nice and loves to give hugs. 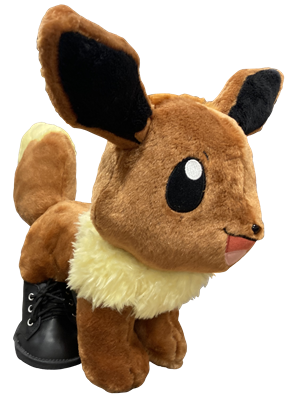 LOOK OUT FOR SOUR CREAM AND HIS DOCS!!! sour cream was a treat i bought for myself on a big mall trip with my friends. he has rockin boots and a chip in his head that smells like bubblegum. he also has a shiny, silvery heart. i think it was for some kind of event.

sour cream is the big brother of all the other eevees. he's an artsy and cool guy, but you shouldn't be intimidated, because he's really sweet. he loves to nap and cuddle, and he's never known anger. sometimes i bring him to gatherings and everyone asks for a hit and sniffs him and passes him around like a bong

a christmas gift from my wonderful friend star!! she appears to be a dupe of the discontinued pikachu poncho eevee plush. that being said, i do not think it detracts from their cuteness!! they are so little and SUPER soft, and quite good quality.

lemon cake is very shy, and a little insecure. their pikachu poncho is a security blanket for them, they get nervous without it. but their siblings and friends help her to be brave! lemon cake is quiet around strangers and not very good at making friends, but when they open up they are very kind and gentle. she is well loved by everyone around her.

my first eevee plush! poundcake was given to me, but i don't remember when or by who.

poundcake is an excitable little kid who loves to explore! he's only five but he wants to go on as many adventures around the world as he can. he loves his friends and his big siblings very much. because poundcake is still a kid, he can be very sensitive and cries easily. but he's always cheered up by a hug from a friend. he's well traveled for someone his age. he loves taking pictures in fun places, like museums or the white house! (i'm camera shy, so he's sometimes my cool vacation photo stand-in.)

a christmas gift from my little little brother. (not to be confused with little brother) currently my only eeveelution plush, though i hope to change that!

holiday is kind of icy and cold. it's easy to mistake her for a mean pokemon at first glance. she's a bit impatient, quite resents being small, and doesn't always play well with others. but beneath that icy surface is a big heart! she's a big sister to the other eevees and truly cares about them. she cheers them on and is very good at giving advice. she's very honest and always tells the truth, even if it's hard.

in my freshman year of college, in the cold, cold midwest, my bedroom's heating was busted and never got fixed. that's my justification for buying expensive eevee pajamas...

i needed something warm and used that as an excuse to get eevee pajamas! i have worn them to school on more than one occasion, because i can just get away with that kind of thing. they are very cozy and warm, and very adorable, though the tail can get in the way when i sit down.

a gift for myself for not failing my driver's test a second time! i found this for about 60 dollars and free shipping, and just assumed that it was a nice off-brand bag someone made. evidently i was quite lucky! it looks like this bag was an officially licensed japan-only release. technically he's both plush AND other, but he's in other because of how i use him. (as a bag.)

cookie cake is hardworking and diligent... but also loves to nap! he works very hard to carry things in his bag belly, and when his errands are done, he goes home and flops over and sleeps! he's very easygoing and likes to give rides to little plush.