Team Rocket
prepare for trouble and make it double! i love team rocket so so much, and so naturally i've started a small collection. it's surprisingly hard to find Team Rocket stuff here in the states since they're not really relevant here anymore T_T (uwaauughh) as a result, many things here are either imported or made by artists i like!

there's a lot of things, so this collection isn't broken up into categories. there is also no particular sorting order, unlike other pages. this collection is largely focused on the team rocket trio, though not exclusively. some things in this collection aren't inherently team tocket related, like certain pokemon plush, but are in the collection because i see them that way. (and vice versa)

temporary note: about 95% of my belongings are in storage for the summer. many items are unavailable to be photographed right now. sorry for the ugly placeholders lol 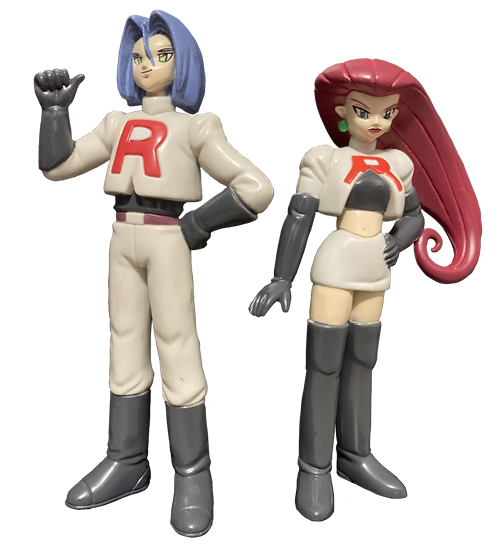 these are for sure one of my favorite items in my team rocket collection!! they are such cute little figures, and one of the few pieces of merch for my favorite characters. for sure the easiest to find. they sit on my desk and keep me company, and i enjoy taking pictures of them too. i could ramble on and on for days about them... but i already did so here's the blog entry if you're interested. i'm hoping i can find a little meowth figure to complete the trio.

i bought these from someone in a server i'm in. i think they're sooo so silly, they're compressed, they've been hydraulically pressed, you can put them in your mouth (not recommended) and on your fingers. (highly recommended) they sit on my desk with the bigger jessie and james. it's a funny contrast! hopefully i can find a meowth to complete this set too :) 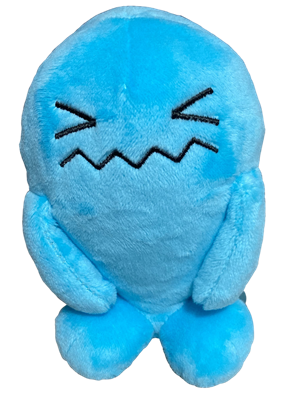 i looked at him online briefly, and for the next three months, i had wobbuffet banner ads on every site i went to. well, it worked, because i finally caved and bought him...

he's jessie's wobbuffet! as such, i like to display him with her figure... even though he's almost as big as her LOL. he's a friendly and goofy pokemon who loves his trainer! he is very absentminded and hasn't got a single thought in his head. he fits snugly in my hand. i like to throw him at people too. it's really funny and my siblings think i'm a menace

i bought this plush from someone in a plushie server i'm in. what's there really to say? he's a fun old wobbuffet plush and i love wobbuffet and fun old plushies!

this wobbuffet is also jessie's wobbuffet. just bigger. how can there be two of jessie's wobbuffet, co-existing on the same desk? well, i don't know. there's two of them, though, and they're the same. they're also friends. that's the power of imagination, right?

THE SILLY!!! i stumbled upon this plushie while looking for official art of mondo and was immediately vexed and intrigued. it led to what seemed like a very, very, very old webpage selling made to order plushies. to my surprise, this site was still active! i ended up buying one. it was a very fun experience! you can find their site here! it's a really fun site to browse through.

mondo is mondo from team rocket, a somewhat obscure character that only appeared in a team rocket drama cd. he's a team rocket trio admirer, and he's JUST like me for REAL.

i usually don't do subscription clubs and such, because i am INCREDIBLY forgetful about what i've signed up for. however, when ocean space posted this GORGEOUS artwork for jessie and james, i had to sign up, even if just for a one-time thing. it's a print, two packets of stickers, a washi tape roll, and a sweet letter and illustration. it's all so cute and amazing quality, it was worth every penny for sure!! the time period for this one has passed, but please check out the artist of these works :)