"To protect the world from devastation..."

BLAH BLAH BLAH this page is TOO PLAIN for my favorites. im gonna come back later and add a sidebar plus more images.

Team Rocket is the villainous organization that terrorizes Kanto, Johto, and the world beyond! They have one goal; gather rare and powerful Pokemon and take over the world. No rules nor laws hold them down or keep them from their villainous ways. Nothing is too far, no act is too evil or too wicked for this syndicate...

they are my FAVORITE characters in the ENTIRE pokemon franchise. at this point my personality is just being a filthy team rocket stan and i'm at peace with that. i have made them the topic of school essays and presentations, i'm Not Pulling Your Leg, i have the 40 slide powerpoint to prove it.... i am a walking team rocket encyclopedia and i can rattle off about a billion points of team rocket trivia. there is so much appeal for me and so many different things for me to love. sometimes i find them cool and menacing and other times i find them silly and funny. their whole deal may be making people miserable but they sure make ME happy!!!!! i love all of the characters in team rocket; the people, the pokemon, the boss and all the grunts. though i do have favorites and i'm not afraid to admit it... i am now going to talk about jessie james and meowth and you can't stop me because this is my house 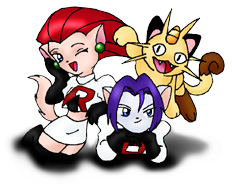 i know theyre sort of the obvious choice but my VERY favorite characters in team rocket are the famed team rocket trio, jessie james, and meowth. they are so FUNNY first of all, but it goes beyond that!! each of them has so many things, big and little, to love about them. i love their friendship (and occasionally mutual hatred) and their endless ridiculous shenanigans. all my cards on the table, i personally am not a rocketshipper, so i won't be talking about jessie and james in any romantic context. i think it's cool if you interpret them that way, though! anyways i'm going to write so many essays about all three of them because i cannot stop rotating them in my mind. 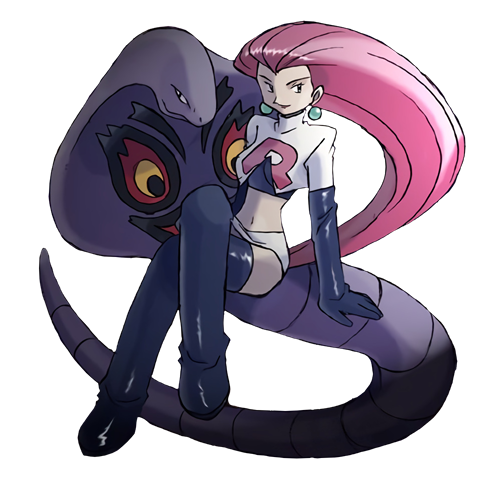 jessie is my absolute favorite character in my favorite team!!!! i love her to BITS, she is my very favorite character in all of pokemon! honestly, what is there not to love?? she's mean and nasty and evil and i love her for it. i support women's wrongs. she makes me laugh (AND CRY ALSO) whenever she's on screen, and she just makes me so happy. i am so incredibly normal about jessie pokemon. her character design is both parts silly and pretty, equally matched with her over-the-top personality to make a really endearing character. the pokemon she catches are consistently really cool (wobbuffet is NOT an exception) and compliment her design so perfectly. visual appeal is not the only aspect of a lovable character, but it totally helps. any episode with her as the main character immediately becomes a banger. she's hilarious, she's bad at her job, and constantly bullying everyone. i love her so much and i think she goes super underappreciated. i think it's actually a crime that so many people just remember her as the designated Girl in team rocket.

jessie's role is that of a recurring comic relief antagonist, but at the exact same time she's also one of the most interesting and well-written characters in the whole show. she has a lot more depth than people give her credit for. beneath all her bravado, she's kind, hardworking, and in many cases genuinely selfless. she's not the way she is for no reason. she's the daughter of a presumed dead team rocket agent and single mother, she's someone who worked towards dream after dream and never won, and now she's someone who's turned to evil to stay afloat... and yet, through it all, not once did she give up and let all that weight crush her. she really and truly cares about her teammates and her pokemon. how many characters can you say have fought a dangerous beast with their bare hands all to protect their pokemon? she makes difficult decisions to let go of the pokemon who ultimately would be happier no longer under her care. (not a trait unique to her but it makes me CRY so whatever) her character ultimately hits home a lot more than the main characters, though probably at least in part because of my age. jessie is someone who has struggled and continues to struggle in life, but never gives up because she loves the people and pokemon around her. that resonates with me a lot. 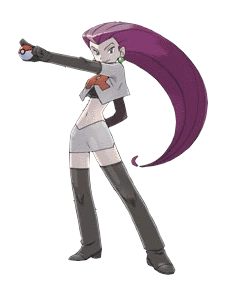 that got kind of deep. okay so have you noticed that shes REALLY CUTE. she has a menagerie of weird little guys that she sometimes dresses up like little show dogs. her caterpillar turned into a freaky little moth and she treated it like a new puppy she got for christmas. i think jessie is a top tier character JUST for that... she gets passionate about interests outside of team rocket, like pokemon contests, or cute clothes. she wears her heart on her sleeve and gets excited about things really easily. she made her own uniform so she could be more fashionable. she has such a close friendship with james and meowth that i think would make anyone jealous. LITERALLY just look at her character design and her big clunky earrings and her silly R-shaped hair. do NOT get me started on college age jessie who immediately sends me into hysterics and cardiac arrest when i see her. i am picking her up in my hand and kissing her. (obligatory "she's literally 25 years old" disclaimer) there's a reason i'm in the self insert webring with this character and it's everything i just wrote. i really love jessie! she is awesome and she makes me literally insane whenever she shows up

james! he's everyone's golden boy (mine too) and for good reason. just like jessie, he's a funny guy who thinks he's more evil than he really is. in contrast to jessie he's a lot more openly sensitive and kind. usually. he's as endearing as they come and i really do think he deserves to be as iconic as he is!! he's both very similar and very different from jessie, and the two of them plus meowth have a really great and funny dynamic together. he's got a great design and color scheme too, one that not only meshes well with his team but stands out as a simple yet unique design on its own. somehow james exists in between "silly little guy" and "malicious convicted felon" and it's perfect.
Right Lorem ipsum dolor sit amet, consectetur adipiscing elit, sed do eiusmod tempor incididunt ut labore et dolore magna aliqua. Venenatis tellus in metus vulputate eu scelerisque. Duis at tellus at urna condimentum mattis pellentesque id. Mauris sit amet massa vitae tortor condimentum lacinia quis vel. Sit amet est placerat in egestas erat imperdiet sed euismod. Erat nam at lectus urna duis convallis convallis tellus id. Cursus eget nunc scelerisque viverra mauris in aliquam sem fringilla. Urna et pharetra pharetra massa massa ultricies mi.